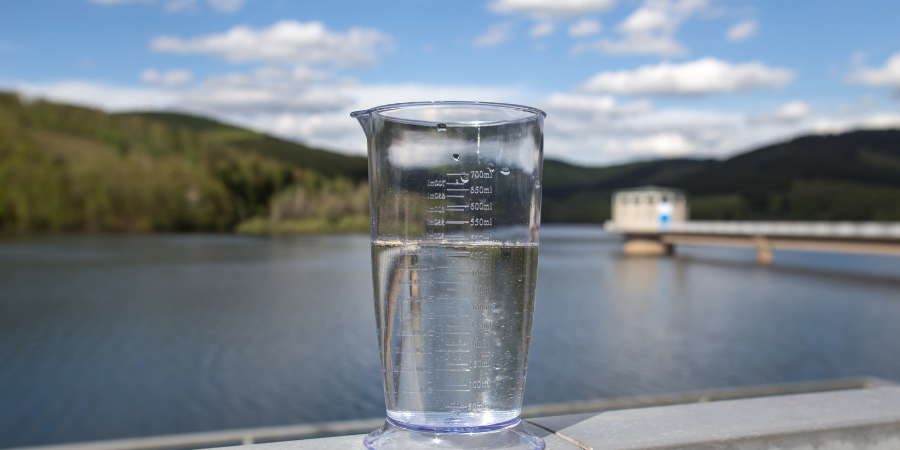 In a recent interview, one of our Mathcad customers revealed his secret to saving time on massive (and award-winning) engineering projects. Best of all, his advice works whether your project brings clean water to millions or just helps you prove the Death Star was a terrible design. Here’s his story:

Protecting our reservoirs presents several engineering challenges. In outdoor reservoirs, you must hinder evaporation, collect and pipe out rainwater, and practically eliminate any chance of contamination from wildlife and wind-blown debris.

One engineer in a unique position to solve those problems is Douglas Hilts, P.E., S.E., owner of Hilts Consulting Group Inc. The company specializes in protective covers for drinking water reservoirs. One recent project was the geomembrane floating cover and liner for the Morro Reservoir Rehabilitation Project in Fallbrook, California. The reservoir covers nearly 13 acres, is up to 60 feet deep, and holds 150 million gallons.

Did Mathcad play a part in that project? You bet. Hilts isn’t shy about describing Mathcad’s role in his award-winning work. He says he’s relied on Mathcad for all his projects since 1995.


Mathcad vs. That Other Popular Program


When asked how Mathcad helps him save time, Hilts first references another popular application. “In Excel, the equations are embedded in the cells. There could be an error in a cell and you can’t find it. Mathcad is transparent and all the equations are visible. You can see everything right there. Nothing is hidden.”

Mathcad beats Excel in several other ways, too, says Hilts. “Mathcad virtually eliminates math errors because of the natural notation. Input errors disappear. Unit tracking definitely helps to prevent errors. I still use Excel occasionally, but most of the time I’ll import the spreadsheet into Mathcad. I use Excel more as a supplemental tool for Mathcad.”

Not only does Mathcad reduce mistakes in ongoing work, it also helps Hilts Consulting Group get a jumpstart on new projects.


Every reservoir is different and requires a unique solution. That doesn’t mean starting every piece of the project from scratch. Hilts has developed his own method of saving time on these massive undertakings. “What I've done is develop a template in Mathcad. I can input the variables and a lot of the calculations are churned out fairly quickly.”

Hilts goes on to explain the time investment and payoff. “I took a lot of time to develop the calculations and the templates. Where it reaps savings is the next project, and the projects thereafter. I'm able to pull up a past project and reuse calculations in a template...”

High ROI Doesn’t Have to Be Complicated


Developing templates is a straightforward method for rapidly launching new projects. More importantly, it’s proof that you don’t need to know every Mathcad trick to get big results.

Hilts is the first to admit he may not use it to its full potential, but still realizes a significant return on his investment. “I think I’m probably a lower-end user. Civil engineering can be less sophisticated than say aeronautical engineering, for example. But Mathcad is a real reliable tool. I’m glad I found Mathcad a couple decades ago, and I’ve been happily using it ever since.”

See how Mathcad brings value throughout the engineering department.

Douglas Hilts: The Mathcad Technique That Shrinks “Massive” Engineering Timelines
A Mathcad customer reveals his secret to saving time on massive (and award-winning) engineering projects. Best of all, his advice works whether your project is large or small.