Why do sailboats move forward in the wind?

The physics of most Olympic events are rather straightforward: a swimmer pushes water behind his or her body with arms and legs, a pole vaulter uses the ground and a flexible pole to spring into the air, an archer uses a bow to store potential energy which is then translated into kinetic energy upon release.

However, there is one event that always amazes me. How does a sailboat move forward when the wind is blowing against it!? 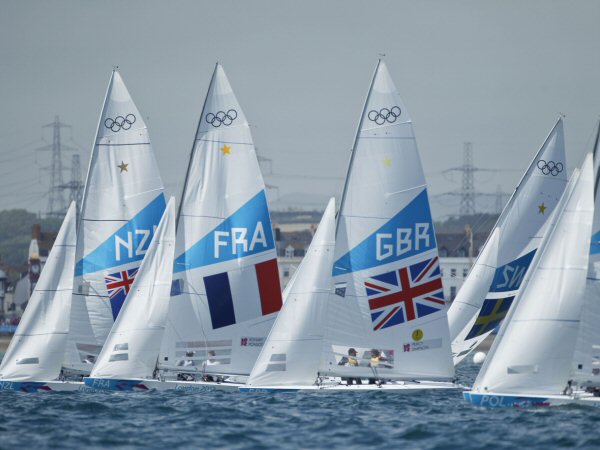 Sailing event in the 2012 Olympics. Image OnEdition, via Flickr

Let’s say our sailboat is heading straight forward (y direction) and there is a hurting crosswind moving left to right across the boat. The air enters the sails moving NW-SE and exits going S.

Summing the initial and final air velocity vectors tells us that there is an acceleration of the air perpendicular to the wind direction, which translates to a wind force in the same direction that the air feels. This force the air feels results in an equal and opposite force the sail experiences.

The y direction of the force on the sail, which I’m calling the lift force thanks to Mr. Bernoulli, actually points forward! So we’re getting somewhere.

This is only half the story though. With just this one force, the boat would move forward, but it would tip over because there is no force opposing the force on the sail that is perpendicular to motion (x-direction).

This is where the hull and sub surface components of a sail boat come into play.

Underneath the sail boat there is what is called a keel. The keel is a component attached to the hull that runs from the bow to the stern. The main function of the keel is to offset the perpendicular (x-direction) force the wind applies on the sails. Without it, the force the sail exerts on the water would be enough to flip the sailboat as mentioned earlier.

If we create a similar free body diagram for the bottom of the boat, we see that the keel force on the water cancels out the force of the sail in the x direction, thus stabilizing the sailboat.

The only other force added by the hull and keel is of course the drag due to the water. This drag force then becomes the only force opposing motion in the direction of the sailboats movement. While the drag force is less than the lift force, the sailboat will accelerate forwards, against the wind. Imagine that!?

I think it’s time for me to learn to sail now!

Not using Mathcad yet?

Calculations are at the heart of engineering. PTC Mathcad is math software that lets you perform, analyze, document, and share your calculations easily.
Best of all, you can download PTC's engineering calculation software free. Try it today!