"Okay, Thor, Hit Me": The Avengers vs. Mathcad 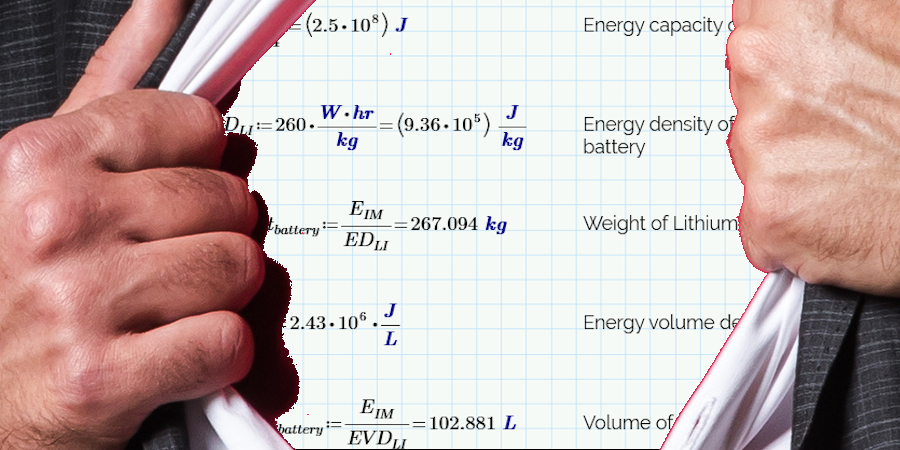 The Marvel Universe has many characters with science-based premises. Iron Man is a mechanical engineer who built a suit of armor. Captain America was created from the Super Soldier formula. Spider-Man was bitten by a radioactive spider. The Hulk received a megadose of gamma rays.

Let’s use PTC Mathcad to examine some of the math and science primarily around the Big Three of the Avengers: Iron Man, Captain America, and Thor.

Here is an image of my Mathcad worksheet: 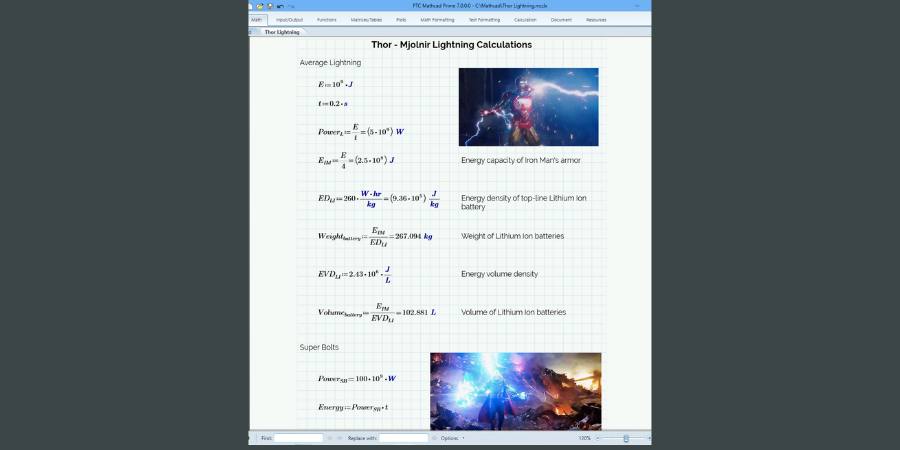 The base unit for energy in the metric system is the Joule. Power is the rate of energy transfer per unit time. The unit for power is the Watt, which is one Joule per second.
In the real world, energy is often expressed in units like kilowatt-hours, which can be confusing. Luckily, Mathcad understands and handles units automatically.

To organize my calculations, I placed images in my worksheet and explained my work with text using Mathcad’s documentation tools.

In the first Avengers movie, Captain America, Iron Man, and Thor get in a fight. (Good guys fighting each other is a comic book staple.) Thor hits Iron Man with lightning. JARVIS (the Iron Man suit AI) reports, “Power at 400% capacity.”

(JARVIS really means energy, but 400% capacity is not a thing. Chemistry and physics allow you to store only so much energy.)

Regardless, we can calculate the energy capacity of Iron Man’s armor. If we assume Thor hit Iron Man with a standard lightning bolt and ignore the loss of energy to light, heat, and armor damage, we calculate Iron Man’s armor to be a quarter billion Joules.

The highest capacity batteries currently available are Lithium Ion. Assuming top of the line performance, Iron Man’s armor would require 267.1 kilograms of batteries at a volume of 102.9 liters. That’s equal to a cube with each side 0.47 meters long.

In “Avengers: Endgame,” the Big Three team up for a battle against Thanos. Thor channels lightning from Mjolnir and Stormbreaker through Iron Man to attack Thanos.
Anyone who reads Marvel comics knew that (1) Captain America was going to say, “Avengers, Assemble!” and (2) he was going to wield Mjolnir. (Come on, if Steve Rogers isn’t worthy, no one is.)

Let’s assume that instead of standard lightning, Thor and Captain America wielded Superbolt Lightning. Yes, that is a real thing. How does that compare to regular lightning?

Thanos is one tough dude if he could be hit with that much energy and not be scratched.

Iron Man’s repulsor rays are supposedly muons. Those are subatomic particles with the charge of an electron but 207 times the mass.

Muons are created when cosmic rays (hello, Fantastic Four) strike particles in the atmosphere. They exist for microseconds before decaying into other particles. Using Mathcad and taking relativistic effects into account, we can calculate the distance muons can travel: 71.6 meters.

We don’t know how Iron Man generates muons, but let’s assume a straight conversion of energy from Thor’s superbolt lightning into mass.

Repulsors have the range we mostly see in the movies, but lightning-powered repulsors don’t pack the punch.

Obviously, this is literally the stuff of comic books. But it is fun using math to see how far these stories are from reality. What math and science around your favorite superheroes do you want to explore? Download Mathcad Express and try the calculations for yourself.

"Okay, Thor, Hit Me": The Avengers vs. Mathcad
Let’s use PTC Mathcad to examine some of the math and science primarily around the Big Three of the Avengers: Iron Man, Captain America, and Thor.