Can Math Help You Fall in Love? 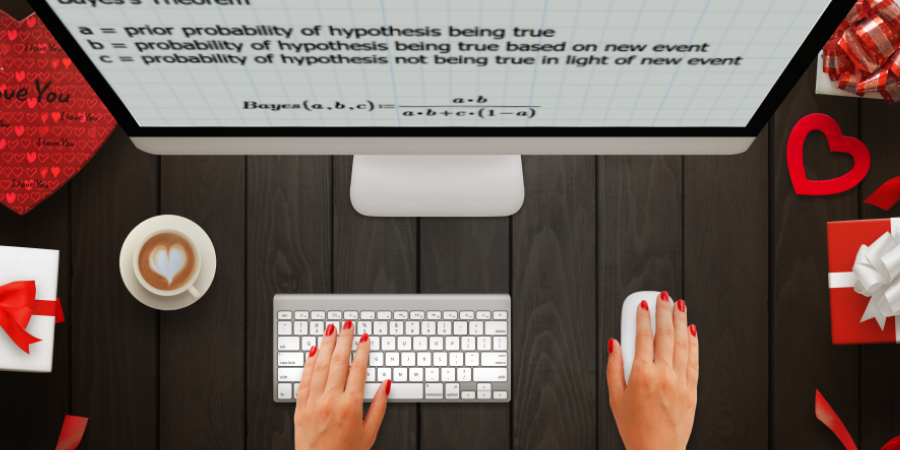 Math makes our lives better in so many ways. It helps us understand the universe, shape the world we live in, and plan for our futures. But can math actually help us fall in love?

The simple, unequivocal answer is YES.

Falling in love is an inherently irrational venture. We can’t help who we fall for, and love tends to make us do stupid things. Irrational thoughts can lead us to irrational acts, making us pursue relationships with the wrong person, or abandon the potential of love with the right person. If only there was some kind of math software that could help us make better decisions in our romantic lives.

Luckily, there is: it’s called Bayes’ Theorem. This equation recognizes that we often give too much weight to the last piece of information or newest event. By giving too much credence to the latest event, we can make incorrect decisions.
In traditional probability math form, Bayes’ Theorem looks like the following:

However, I prefer the format that Nate Silver uses in his book “The Signal and the Noise,” which is much easier to understand and calculate:

In PTC Mathcad, I write this as a function involving three variables:

Let’s look at our first scenario.

You start dating someone. You really like them, might even be in love with them. But you’re cautious. Your heart has been broken before. One day, you come down with the flu. You have no medicine, and you’re too weak to cook. The person you’ve been dating comes over, at risk to their own health, loaded with a variety of over-the-counter remedies, vitamin C, and zinc; prepares a few days’ meals for you; and sleeps on the couch to make sure you’re okay.
Prior to your illness, you estimated a 25% chance he or she was in love with you. But as a result of caretaking, you think there’s a 50% chance it’s love. On the other hand, there’s a 50% chance the caretaking happened because he or she is simply a good person.

This is an interesting result. Based on this incredibly caring gesture, you’re inclined to believe there’s a greater chance your boyfriend or girlfriend is in love with you. But at 50-50, based on the latest event, the probability ends up being exactly the same as it was before you got sick. Emotionally, we place too much weight on what just happened, as opposed to the history of your relationship.
Now, let’s look at “ghosting,” a situation in which you stop hearing from the person you’re dating:

You have a fight with someone and think there’s a 10% chance they will break up with you as a result. You don’t hear from them in 3 days—no calls, texts, emails, or social media posts. You suspect that there’s an 80% probability you’ve been “ghosted.” That leaves a 20% chance it could be for another reason (last-minute business trip, family emergency, stolen phone/lost all contacts, etc.).

If you think there’s an 80% chance someone is about to break up with you, to save face, you might break up with them pre-emptively. But here Bayes’ Theorem shows that the chances are about one in three that your fears be based on reality. Maybe he or she just needs time to process or think things through – or perhaps life did indeed get in the way.

You’re dating a guy and believe he is faithful. You estimate a 1% chance that he is cheating. But then you find out the weekly “boys night out” is a ruse; his friends say he hasn’t attended in months. You immediately believe there’s an 85% chance he lies because he’s cheating, and only a 15% chance he’s lying for another reason (he’s in Fight Club, he’s doing volunteer work, etc.).

Most of us, if faced with a situation of lying, might immediately fly off the handle and burn all his stuff, flame him on Facebook, and send an incriminating email to his boss. But here Bayes shows us that the probability he is cheating based on the new information is less than 6%. Rather than react irrationally, it’s better to have a conversation.
(As it turns out, he had been taking piano and singing lessons for months to surprise you with a romantic wedding proposal.)

Let’s be clear: you should not be using Bayes’ Theorem as some kind of threshold to make decisions about your love life, like whether you love someone, should marry someone, or divorce or break up with your partner. But it helps you process new information in a more rational manner, place new events in their proper perspective, and prevent you from jumping in or out of love too quickly.

Bayes’ Theorem can be used not just in your love life, but in any area where you must make important decisions – career choices, purchases and investments, support of political candidates – that would otherwise be influenced by your emotions over recent events. By using math software in your love life, you’re applying more rational, logical thinking to an overwhelmingly irrational situation, and thereby increasing your chances of success and happiness.