The question today is: "Who's got the Pandorica?"

Just kidding. Inside joke. If you’re a Doctor Who fan, you totally get it. And if you aren’t a Doctor Who fan, here’s a quick explanation before we dig into the strange math of alien longevity, reincarnation, and British TV.

Dr. Who for Beginners

Doctor Who is a long-running BBC science fiction television program (since 1963), a significant part of the British pop culture. It depicts the adventures of a Time Lord called "The Doctor," an extraterestrial being from the planet Gallifrey. The Doctor explores the universe with an artificially intelligent spacecraft called the TARDIS. The Tardis has several special abilities and can disguise itself as a police telephone box.

Since the beginning, twelve actors have headlined the series as the Doctor. The transition from one actor to another is woven into the plot of the show. The Doctor can regenerate into a new incarnation – an idea introduced in 1966 after the departure of original lead, William Hartnell, who was becoming very ill at the time. The concept is that the Doctor, a Time Lord, takes on a new body and personality to recover from a severe injury or anything that would otherwise kill a normal person. Each actor's portrayal differs, but all represent stages in the life of the same character and form a single narrative.

To me, Doctor Who is all about kindness and keeping your mind opened to new ideas. So I thought about playing with some data and see what kind of calculations and correlations I can make in PTC Mathcad.

How Long Did Each Actor Play Dr. Who?

Let’s start with noting how long each actor played in the main role. Writing a vector shows the average number of years an actor is cast as the Doctor. 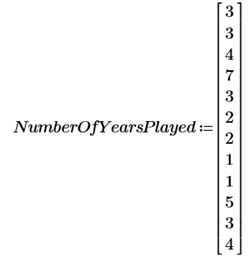 Note, PTC Mathcad warns you when a variable is undefined. We first defined it above as NumberOfYearsPlayed. If we forget a later type it as NumberOfYearsActorsPlayedInDoctorWho, we get a reminder to check variables.

Approximate Age of Dr. Who in Time Lord Years

Moving on, we know that so far 12 actors played the Doctor, as confirmed by the length of the vector:

In the script, each Doctor had more or less the following approximate age. If we define and evaluate it, PTC Mathcad gives us the general representation format of the numerical values, which can be further changed from the Math Formatting tab: 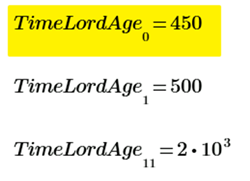 Time Dr. Who Needs to Regenerate

We can check for the number of years that The Doctor lives between regenerations, as well as the minimum, maximum, and mean values for The Doctor’s age and regeneration intervals: 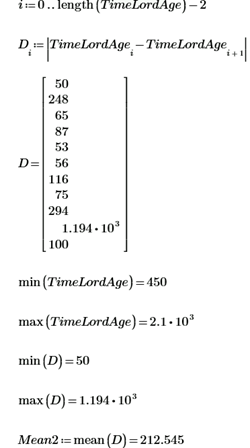 Age of Dr. Who in Human Years

The last number, 212.545, is interesting. It shows how many years pass from the Doctor’s life, as a mean. If you recall, Mean1 was about three years. We’ll divide Mean2 by Mean1 to correlate how the Doctor ages compared to how humans age.

The result is 67.12 years, almost an entire human lifetime. That’s how many years the Doctor ages to every Earth year.

Which Dr. Who Lived Longest?

Now let’s take a few more factors into consideration, such as:  what age was the actor in the main role when cast for the part? We’ll use ActorAgeStart and TimeLordAge and see how the graph looks. 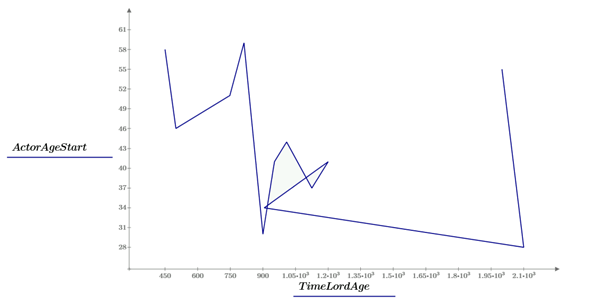 Given the science fiction nature of the show, it follows that not all mathematical and physical laws are respected. So we wouldn't expect the age curve to be linear or exponential, would we? It rather looks like a kid's scratch on a wall. Clearly, the Doctor’s human appearance doesn’t show a consistent age with each incarnation.

Let’s add more factors: a vector for numerical order of the actor, one with the name of the actor, the age - in real life - when the actor stopped playing (that can be found easily by adding the NumbersOfYearsPlayed to ActorAgeStart ).

We can use the match function to find elements in a matrix that match the searched value exactly. Today we are searching for the biggest life span as a Doctor and who got so lucky to have it, fictionally speaking.

And the winner is David Tennant!

Protip: Another good thing in PTC Mathcad is that when using min, max, mean, match, augment and other functions, the software automatically labels them to help us recognize them easier: 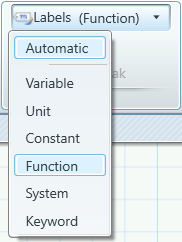 What  exercises can be done based on the TV series that you enjoy? Maybe one of these: find the mean number of episodes broadcast during the years, see the growth/decline in salaries for a certain role, figure out who was the tallest actor, find episode ratings, and so forth. You just need to make up your mind about what you are curious about and search for documentation. In the end, give it a go with PTC Mathcad!