How to Make a Raffle Program in Mathcad 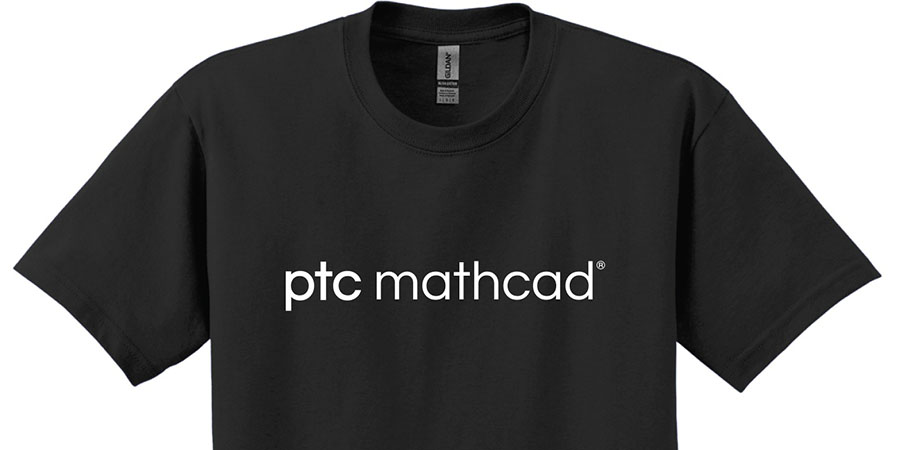 One of the most exciting parts of the Mathcad Virtual Conference 2022 was our live raffle for our brand-new, 100% cotton PTC Mathcad T-shirts—the first new Mathcad merchandise in a very long time. When registration opened in August, the form asked if registrants wanted to participate in the raffle. We met our cap of 500 valid entries (aka no PTC employees, Mathcad resellers, or duplicate entries) in five days!

Our biggest requirement, crucial to any successful raffle, was that the drawing had to be as random as possible. We wanted to ensure that the process would be transparent and credible for the audience.

As well as accommodating the data import from Excel and spitting out 25 winning IDs, we also had to prevent anyone from winning more than once. Since we would be doing the raffle drawing live, we absolutely had to ensure the raffle drawing was fool proof. An error or a duplicate name/ID could have undermined the entire event we had worked so hard on.

Given the high expectations from entrants and ourselves, we knew we had to develop the raffle program in PTC Mathcad Prime. Read on to learn how we made it and how it worked so you can understand the program and modify it for your own purposes. Check out the raffle drawing itself here:

Click here to download the Mathcad worksheet used during the raffle, with a sample Excel data file (sample.xlsx) included in the .zip. (This takes the place of the original registrants.xlsx file from the live raffle.) You will need Mathcad Prime 8 to open the file, though you can also replicate it in earlier versions of Mathcad Prime. You can get the latest version of PTC Mathcad Prime by installing our 30-day free trial. Please unzip the file and save both the worksheet and sample.xlsx in the same directory.

At the very beginning of the worksheet, we set a variable for the desired number of winners (25). This is an arbitrary input that you can change for any raffle you’re doing. We have an existing Excel data file (registrants.xlsx or sample.xlsx) that we imported into Mathcad Prime as a matrix with READEXCEL(), with the 500 raffle numbers set to a registrants variable, and we use the rows() function to confirm this list has exactly 500 entrants. (PTC sent out an email to the 500 eligible entrants before the conference with a “CPTCP0000########” format. We omitted the “CPTCP0000” prefix at the .xlsx file level that was common to every raffle number for the purposes of clarity.) 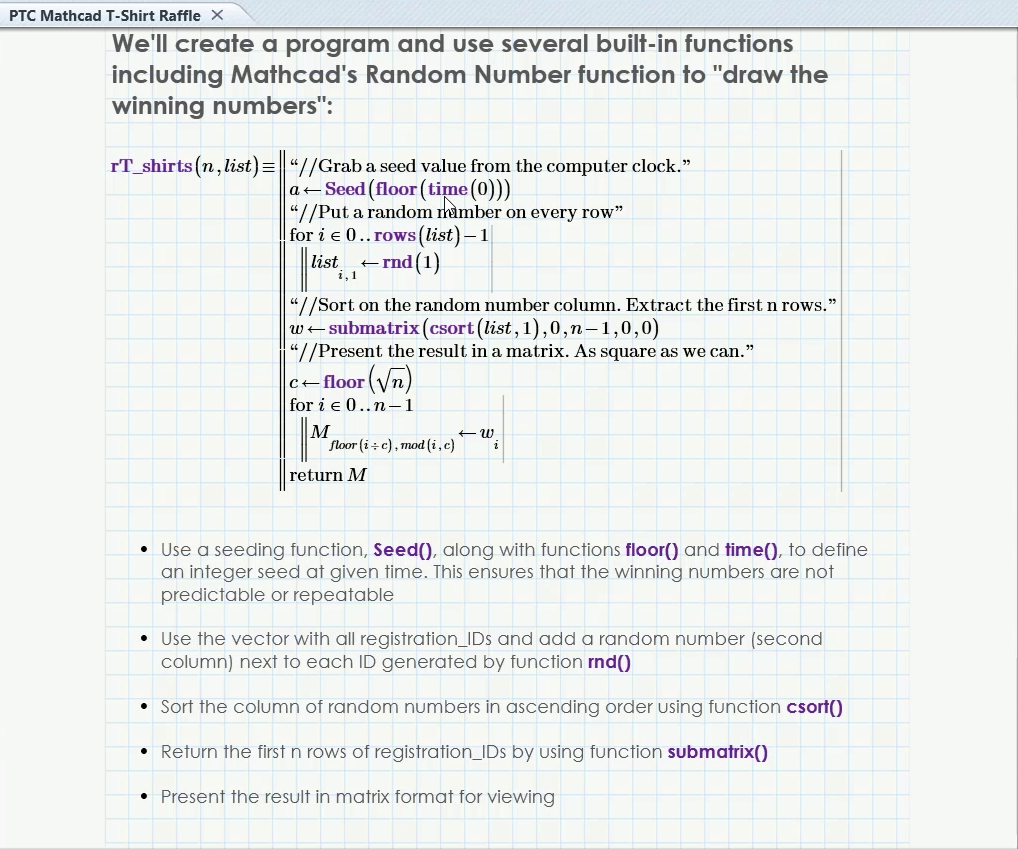 We defined our program, rT_shirts(), to take two arguments: the number of winners (n), as well as a list (our eligible entrants matrix, which will be our registrants variable).

The star built-in function in the program is the rnd() function, which pulls a quasi-randomly generated number. Random numbers in software like PTC Mathcad Prime are based off uniformly distributed sequences of numbers, where if you run them enough times, you’ll repeat seed values and can predict outcomes. If you always reset to the same Seed() value, the rnd() function will repeat the same result no matter how many times you recalculate. That’s why the program begins by setting a Seed() to a number based on an always-changing time() value, which is based around your computer system time at the current time and the date. This is how we make the ensuing random numbers truly unpredictable. Even if you run the program at the same time of day on two different days, the fact that the date is also accounted for means there is no way we can know which random number seed will be used ahead of running the program.

With that randomness in mind, the program generates a two-column matrix. The first column has the raffle number IDs, and the second column (thanks to the “for loop”) has a random number between zero and one.

Then, the program executes the csort() function to sort the two-column matrix in ascending order by the second column of random numbers. Then it takes a submatrix (“w”) of that now-sorted matrix of the first “n” number of rows (only the winners) and only the first column with the winning ID numbers. This is how we avoid generating duplicate winners. Rather than pulling winners one at a time, we pulled them simultaneously by picking the “n” number of winners associated with the lowest randomly generated numbers. Every raffle ID has an equal chance of having its associated random number be a low enough number to be selected in the winning “n” number of rows.

Having created the submatrix of winning IDs, the program lastly focuses on the aesthetics of the output by having a “square”-shaped matrix as opposed to a one-column, 25-row output. Our program calculates the floor of the square root of the number of winners, and then uses that to create a matrix with that number of columns of the same information as the submatrix “w.” This means the winning numbers are now distributed horizontally as well as vertically within a 5x5 matrix to make it easier to read, since we intended for the raffle entrants to look at the matrix during the conference session for their winning number.

So, in summary: The PTC Mathcad Prime program explained here takes an imported data list of any arbitrary row length and randomly selects an arbitrary number of “winning” rows using Mathcad’s random number generator and list/matrix manipulation functions, and then outputs that selection in an aesthetically pleasing matrix.

There will be several more opportunities to earn a PTC Mathcad T-shirt in the coming year, including at PTC’s premiere in-person event, LiveWorx 2023 (May 15-18 in Boston). You can also earn shirts as a thank-you for sharing your customer stories with us in a case study (message us if you’re interested) or in our Mathcad Scripted Controls Working Group. Congratulations to all of our raffle winners!

There is much more to the conference than just the raffle. Check out the free, on-demand replays and more free worksheets!

David J. Newman is a Marketing Specialist for PTC’s CAD segment. He works with PTC’s partners so they have the marketing assets they need, and he also is in charge of the strategy and execution for PTC Mathcad marketing.

How to Make a Raffle Program in Mathcad
Read how to use Mathcad Prime's programming and RNG features to set up a raffle, just like PTC did at the Mathcad Virtual Conference 2022 for T-shirts. Mathcad Prime worksheet included for download!