Football Team Cursed? Here's How to Find Out 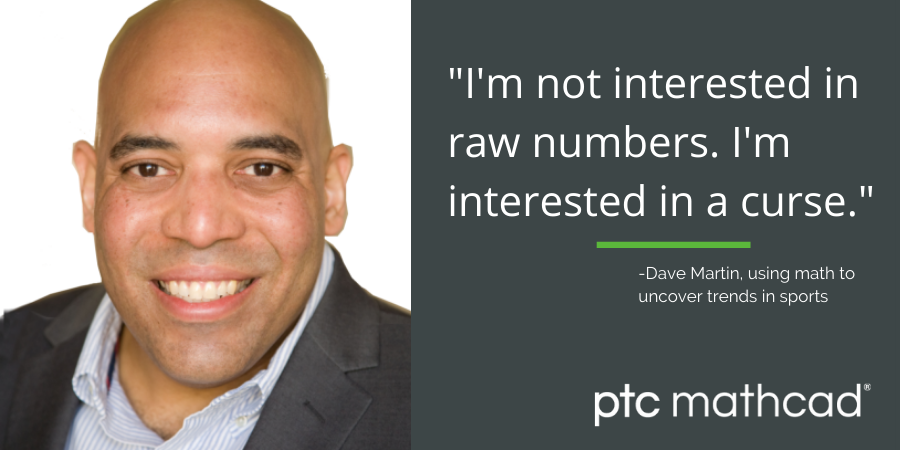 I am a Philadelphia Eagles fan. I know the meaning of pain and disappointment. Growing up, I always heard that my Philadelphia Eagles had a December curse. There’s a lot of reasons why a team can break down in the fourth month of the season. It’s a grueling sport and injuries are part of the game.

Does the Data Support a December Curse?

I used to work for Amazon, where they say “we’re a data-driven company.” A mark of maturity is to change one’s mind, opinions, or beliefs in the light of new evidence. I decided to analyze the history of my favorite sports franchise to answer the question using data: do the Philadelphia Eagles have a December curse?
The first step was to collect 53 years of Eagles data, for their records from September through November and December, in an Excel spreadsheet: 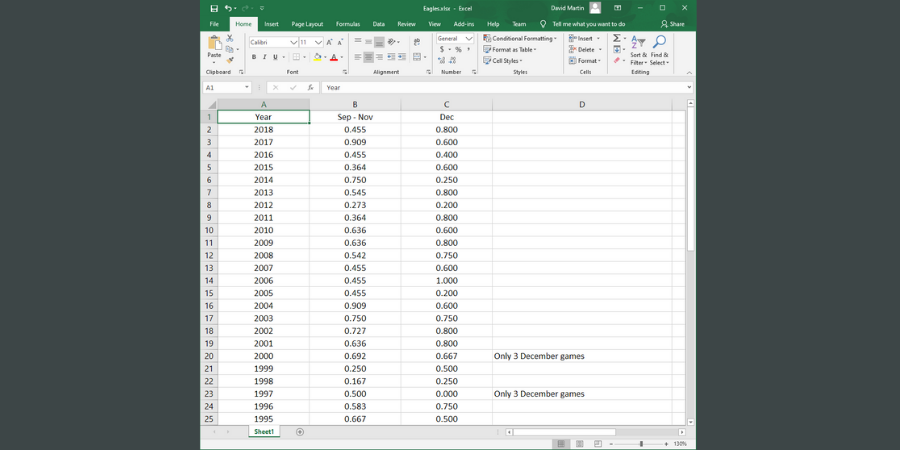 To determine whether my Eagles have a December curse or not, I read the data into PTC Mathcad. I find it much easier to do simple analysis in PTC Mathcad than in Excel.

In Excel, I could do this with a macro, but it requires more of a skillset in coding and is certainly not as transparent. Writing programs in PTC Mathcad to perform calculations that rely on logic such as for loops and while loops are easy to do. 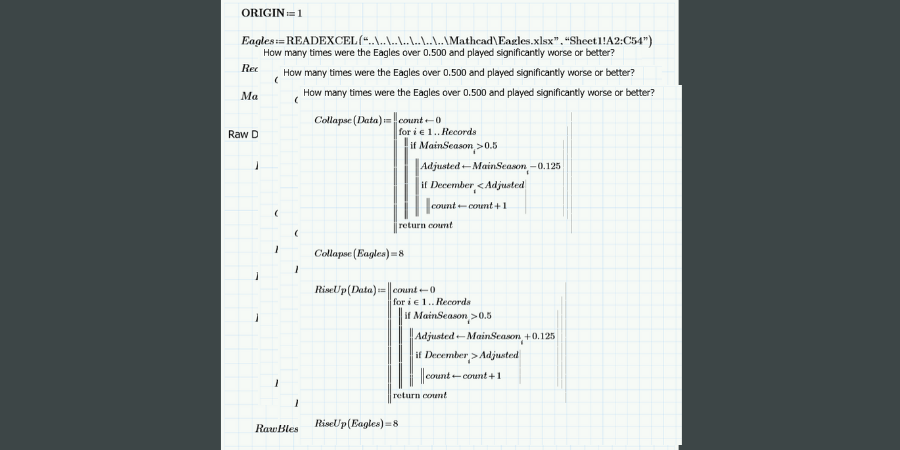 That’s a little surprising. Already my Eagles are showing evidence that my conventional wisdom is unfounded. But I’m not interested in raw numbers; I’m interested in a curse.

I pick a delta of 0.125 as a significant difference in play for December. (That’s 2 games over a 16-game season, the difference between making the playoffs or not.) When I factor this in, it turns out that 22 times the Eagles played significantly better and only 13 times they played worse. It’s still showing that the Eagles are a December team.

But what about collapses? First, I calculate how many times the Eagles went into December with a winning record: 24, or 45.3% of the time.

How many times was their December records more than 0.125 worse than prior? Eight, or one-third of the time. 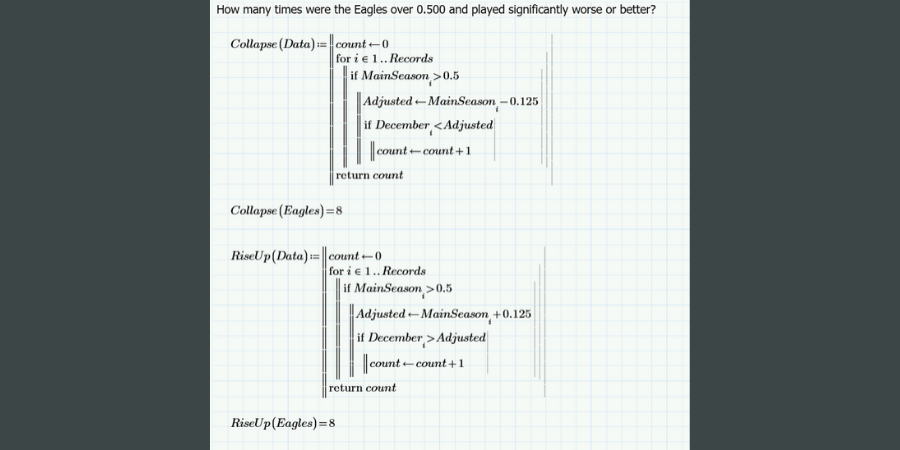 At first, I think, wow, that’s pretty bad, but then I find that eight times they went into December over 0.500 and have a record more than 0.125 better than prior. They’re just as likely to rise up as they are to collapse.

Where Do Bad Ideas Come From?

Seeing that the data contradicts my beliefs, I wanted to figure out why I held this incorrect belief. I analyzed the data up through my time in high school. In that case, the Eagles played significantly worse 6 times in December, but only 3 of those times they were over 0.500. (When the Eagles stank, they really stank.)

Therein explains how my childhood forever scarred me into thinking the Eagles had a December curse.

Some other interesting numbers:

What do I take from this? My Philadelphia Eagles don’t have a December curse – they have a December blessing. By analyzing the data, I was able to dispel a long-held incorrect belief.

In this post I used data analysis on a sport, a pastime, a hobby. Let’s look at the bigger picture. As I wrote about Bayes’s Theorem, it’s human nature to ascribe more weight to bad news than good. Data analysis with PTC Mathcad helps us make better decisions by replacing false beliefs and irrational assumptions with facts.
“Fly, Eagles, fly, on the road to victory…”

It turns out the Eagles don't have a December curse, but given that they've only won the championship once in 3 trips to the big game in 54 years, it's clear that they have a January curse. And a Seahawks curse. They lost twice to Seattle at Lincoln Financial Field this season. I live in Seattle and both Eagles games I went to, they lost - even their championship season.

'Any given Sunday, any team can beat any other team.'

Use the calculation software professional scientists and engineers use. Download your free copy of PTC Mathcad Express today. Choose the full functionality option, and you’ll get the full version of PTC Mathcad Prime for 30 days.

Football Team Cursed? Let's Find Out
A Philadelphia Eagles fan uses PTC Mathcad (and you can too) to find out if his team is cursed.