The (Magical) Math & Engineering Behind Game of Thrones 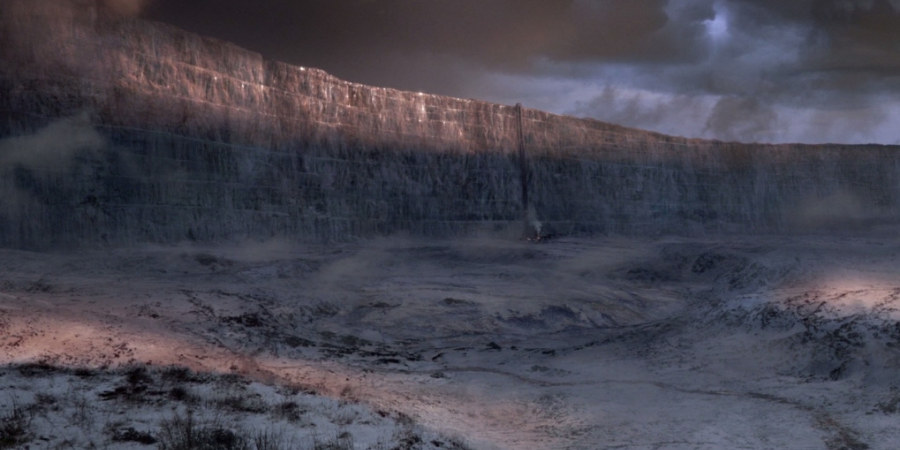 I’ve applied PTC Mathcad to Star Trek and Die Hard; now let’s look at some numbers from the greatest television epic of all time, Game of Thrones!

The Great Wall of Westeros

The Wall that separates Westeros from the North is 300 miles long, 700 feet high, and 300 feet wide. That corresponds to a volume of 12.3 billion cubic yards. To put that in perspective, that corresponds to 8990 Empire State Buildings, but 442 Walls could fit into the Grand Canyon.

Given the density of ice, the Wall weighs 9.70 billion tons, which comes out to 166.9 times the calculated weight of the Great Wall of China. While the Great Wall is much longer at 21,196 kilometers, it’s nowhere near as high or tall.

We can also calculate the stress exerted on the ground by that much material, and it’s 1.954 Mega Pascals. The Ultimate Compressive Strength of ice is only 3 Mega Pascals, and for concrete it’s 20-40 Mega Pascals.

It’s a good thing Bran the Builder built the Wall using magic because I don’t like those margins of safety.

A Song of Debt and Finance

As I’m writing this, I’m convinced that Cersei made a grave mistake by paying off the Iron Bank of Braavos. With the debt gone, she removed any incentive for the Iron Bank to support her claim to the kingdom.

After Ned Stark became the Hand to King Robert Baratheon, he discovered that the surplus of funds under the Targaryan kings was now a debt of 6 million golden dragons. Half that was owed to Tywin Lannister. Later after Tyrion Lannister becomes Master of Coin under King Joffrey, he tells Bronn that the debt to the Iron Bank is now tens of millions of golden dragons.
George R.R. Martin has admitted that he didn’t keep the numbers straight or consistent. But let’s figure out the corresponding interest rates.

Let’s say that you were 3 million in debt and 2 years later the debt was now 10 million. Rearranging the formula for compounded interest, we can figure that comes out to a rate of 0.826 or 82.6% per year. The Iron Bankers were worse than loan sharks.

Some of my math. Let’s suppose that Tyrion was talking about the total debt. If it started at 6 million and was now 10 million, that would be a rate 0f 0.291 or 29.1%. Interest rates might be the biggest killer on Game of Thrones.

Flight of the Dragon

It hurt my brain thinking about how Daenerys saved Jon Snow and Force Ten from Winterfell in the penultimate episode of season 7. Let’s try to figure out how fast the dragons would have needed to fly to pull off the rescue.

Ignoring the time it took Gendry to run back to Eastwatch, let’s say Jon and his band were trapped for two days. (It seemed like less time to me…)

It’s about 1500 miles from Eastwatch to Dragonstone. Let’s assume that ravens in their world fly at the same top speed of 50 miles per hour. That would be a journey of 30 hours assuming no rest or eating stops (new ravens are dispatched from cities along the way).

Upon receiving the message, if Daenerys had immediately headed north, Viserion, Drogon, and Rhaegal would have needed to average a speed of just over 83 miles per hour to arrive in the nick of time.

It was preposterous, but after looking at the math, not as bad as I suspected.