The thought of empty milk glasses and full stockings causes a flurry of excitement on Christmas Eve. Millions of children around the world await their visit from a certain red-suited man and his reindeer. And while the kids lie in bed wondering about the surprises to come, the future engineers and physicists might also ask, “How does Santa do it?”

It’s a tough gig. Plenty of experts have weighed in with formulas of how fast Santa needs to fly and how he disperses so many gifts in a single night. Many rely on Einstein’s Theory of Special Relativity to explain the phenomena.

But one particular question stood out unanswered. How does St. Nick get down the standard 12” diameter chimney and into your living room? Does Special Relativity help him do it?

Can math explain how Santa fits down the chimney?

To simplify, Length Contraction in the Theory of Special Relativity describes the phenomenon of how an object contracts parallel to its direction of travel, from the point of view of the observer. That means Santa needs to travel so fast that his waist contracts down to the same diameter as the chimney. (Save that “well, actually . . .“ for a moment, physicists).

First, the Mathcad fun. For our calculations, we’re giving Santa a 52-in waist (or a diameter of 16.5 in). That requires a 4.5-inch reduction to fit through the chimney. We find the necessary velocity with some help from Lorentz Transformations and the Mathcad Symbolics Engine. 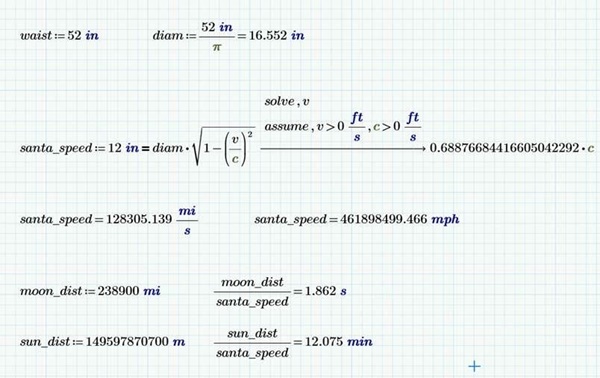 The bad news? While it’s fun to play with numbers, this doesn’t actually work this way according to Special Relativity. In theory, when Santa travels at high speed, his length shortens, but only along his axis of travel. If he’s traveling in the direction of his face, the distance between his back and front compresses. His waist changes to an elliptical shape instead of shrinking evenly. To get down the chimney, he has to change direction. Even going down feet first the length contraction works against him.

But Santa doesn’t let natural laws get in the way of his job. Zipping about the planet and delivering gifts just requires a little extra magic on top of the science. A freshly baked cookie helps, too.

Want to try your own holiday math experiment? Download PTC Mathcad Express, and choose the 30-day full functionality option, and you’ll get access to the full version of PTC Mathcad Prime 3.1 for 30 days.