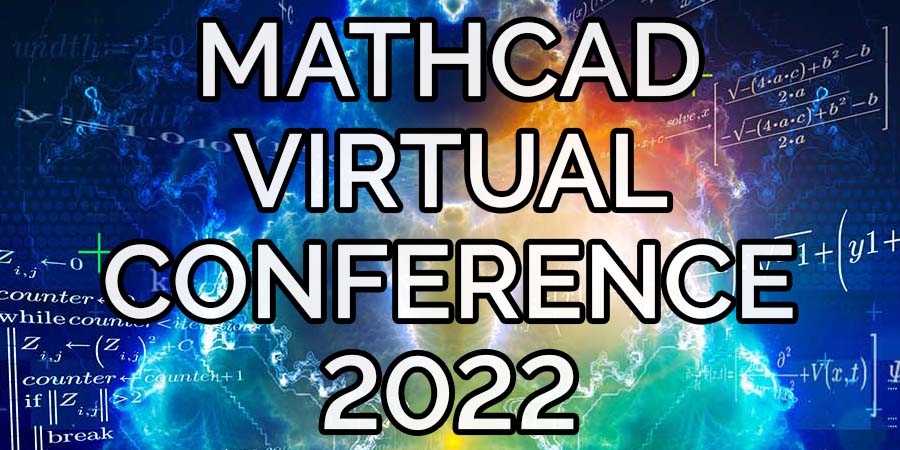 Thank you to everyone who attended the Mathcad Virtual Conference 2022. With more than 2000 registrants, the third-annual virtual conference was the most successful Mathcad virtual event yet. If you missed the event or would like to rewatch it, the on-demand session replays are available here.

Curious about what you’ll learn by watching? The sessions were designed for you to learn something new about PTC Mathcad Prime. You might use that information in your own work, or you might find multiple inspiring nuggets that can lead to other ideas. After a brief “The State of Mathcad Prime in 2022” intro by PTC CAD General Manager Brian Thompson, you can watch any of the following four sessions that make up nearly two hours of content:

Andy also shares a demo of text styles coming to Mathcad Prime 9, which work similarly to other software with text styles. You can change the style on text, region, and multi-region levels. Andy also shows editing styles and creating new styles, so you can customize them based on your organization’s needs. Along similar lines, Andy reveals the more color option, expanding Mathcad Prime’s color selection for custom, user-defined colors. Custom colors will also be selectable for custom text styles. 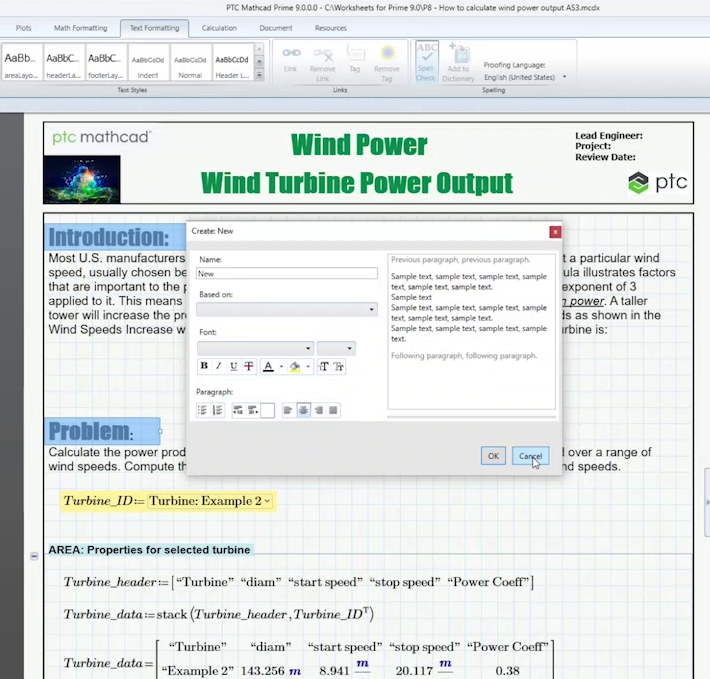 Andy then takes a look at the new Pdesolve function for setup in a Solve Block. Andy also showcases a powerful enhancement to Mathcad Prime 9’s symbolic engine: the ability to solve ordinary differential equations using the solve keyword, as well as expansions to the assume keyword, so you can now make assumptions about functions. 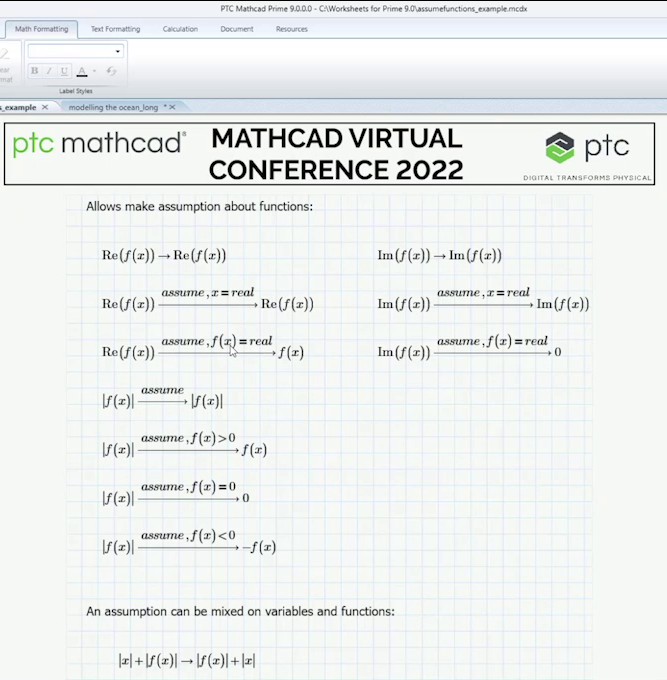 Andy’s session isn’t exhaustive for all the new features coming to Mathcad Prime 9, so stay tuned to Mathcad.com (and stay subscribed to the Mathcad Minute newsletter) for a more comprehensive list of updates when they’re available.

But Andy doesn’t stop there. He also discusses release candidates for what may come in Mathcad Prime 10, 11, 12, and beyond. According to Andy’s roadmap planning, scripted controls will be the biggest new feature coming to Mathcad Prime 10. Due to customers’ emergent behavior with scripted controls in legacy versions of Mathcad, PTC has created the Mathcad Scripted Controls Working Group on the PTC Community. This demonstrates PTC’s commitment to customer-driven implementation. Note that there is a very limited amount of space available in the group, and participants must be active contributors.

During the live session, we got a lot of great feedback. Participants’ feedback was primarily positive about the new features (including internal hyperlinks, which are also coming to Mathcad Prime 9), while also expressing additional features you’d like to see in future releases. PTC collects this feedback so Andy can prioritize what gets into future releases. Please use the PTC Community Mathcad Ideas board to vote for ideas you’d like to see happen, or to submit your own!

Design of Experiments in Mathcad Prime

In this instance, Anji examines the effect of four quantitative factors (tire pressure, ignition timing, oil type, and gas type) on the fuel economy of a car using measured test data. She shows how to use a factorial design matrix and calculate the mean and the standard deviation of the test data. She then creates an analysis of that data with functions such as quickscreen to determine the relationship between the factors and the measured data, which is then graphically represented with an effectsgraph and the Pareto plot. 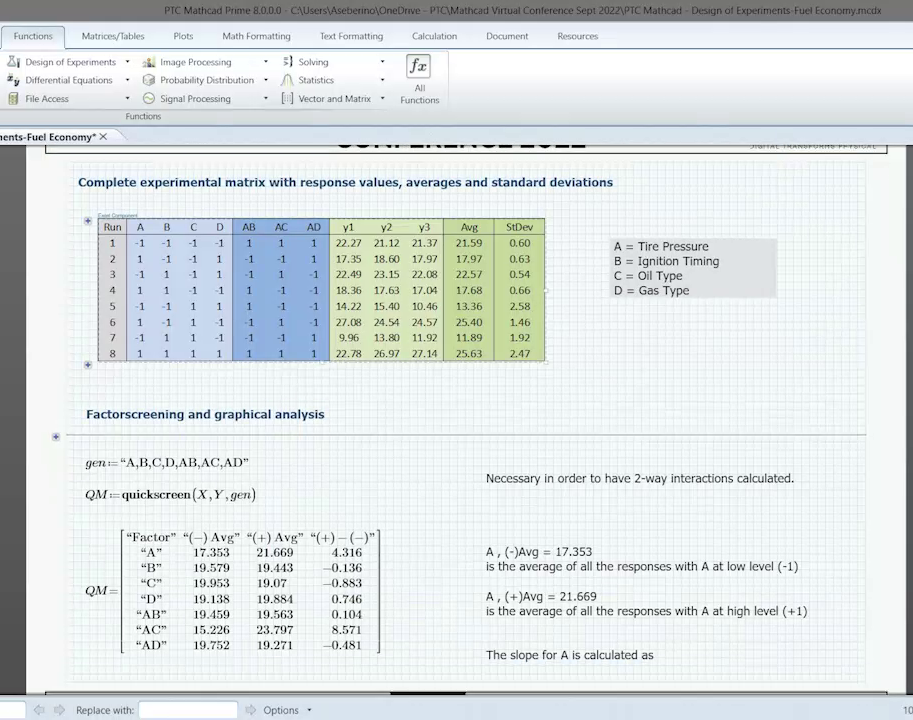 Anji then creates a yield function using the weighted contributions of the independent factors and the interactions between the factors, modelling her experimental results data. Anji’s worksheet then goes even further by statistically analyzing the results with the anova function and a polyfitc function.

Feedback we received on the live session was quite positive, with some astute audience members wondering how they can incorporate Design of Experiments analysis into their own work in fields such as structural analysis. Many of the questions we got during the session asked if Anji’s Design of Experiments worksheet would be available after the event. The answer to that is yes: If you go to the replay-on-demand page, you’ll see a button to download the worksheet she used.

Dr. Anna Novikova is a member of the Mathcad Research and Development Engine Team, and in this session she presents nearly two dozen examples of the enhancements made to the numeric and symbolic engines between Mathcad Prime 7 and Mathcad Prime 8. These include some undocumented enhancements you won’t find in Mathcad’s help files. 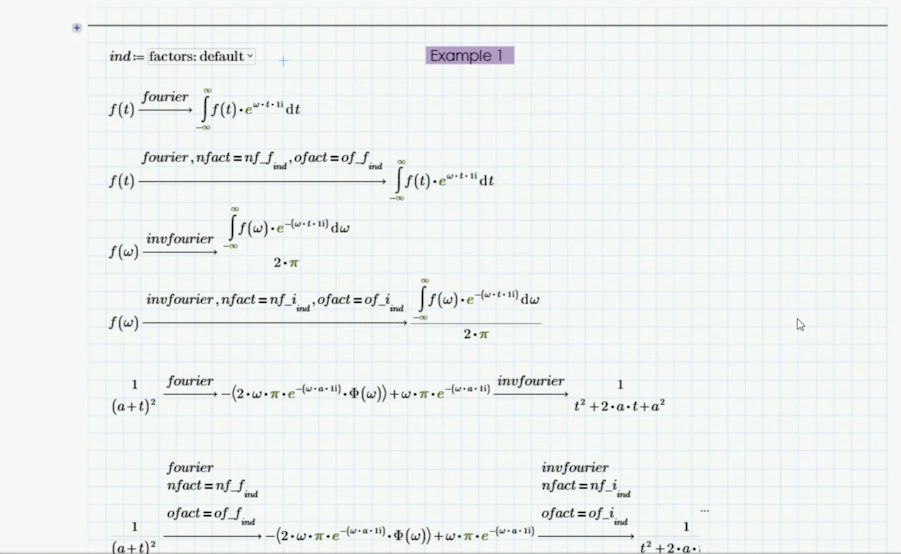 Anna’s session featured pure math examples of things like fourier, laplace, and z-transformations, as well as improvements to symbolic engine keywords. The last few minutes of Anna’s presentation are dedicated to using the symbolic engine to perform a nodal analysis of solving a circuit with Laplace transform in Mathcad Prime—a practical real-life example.

While not all the nuances of PTC’s updates to the new symbolic engine may be applicable to your specific work, our live audience appreciated PTC’s excellent progress and expanded capacity of our engines. PTC is fulfilling our promise about the ability to grant customer requests with the new symbolic engine that we weren’t able to do with our previous engine from Mathcad Prime 6 and earlier.

Anna’s session features a lot of enhancements we haven’t talked about publicly before. But don’t worry if it feels a bit overwhelming. The on-demand replay is self-guided and allows you go through it at your own pace. We’ve also made both of Anna’s worksheets available on the replay page.

If you're interested in more in-depth engine content, I recommend going to the “All About the Symbolic Engine in Mathcad Prime 7” session from the on-demand replays of The Mathcad Prime 7: Virtual Roadshow 2021. This conference session with Anna was the spiritual sequel to that session, presented by Ilia Novikov (no relation), also of the Mathcad R&D engine team. Ilia’s worksheets are also available for download.

Andrew McGough returns in the conference’s last session for an interview with PTC Mathcad Prime customer Daniel Bo Olesen, founder and engineer at OC Engineering ApS, a structural engineering start-up based in Denmark. Daniel’s focus is to save clicks and automate as much of his internal processes as possible, allowing him to spend that time doing more interesting, less tedious work.

In the session, Daniel explains the Danish regulatory requirements that form the basis of his deliverable documents. He came prepared with pre-recorded footage of his worksheet templates that use Mathcad Prime’s embedded OLE objects and the Microsoft Excel integration extensively to automate a lot of work. He then uses Mathcad as the backbone of his business to deliver the required documents for his clients. 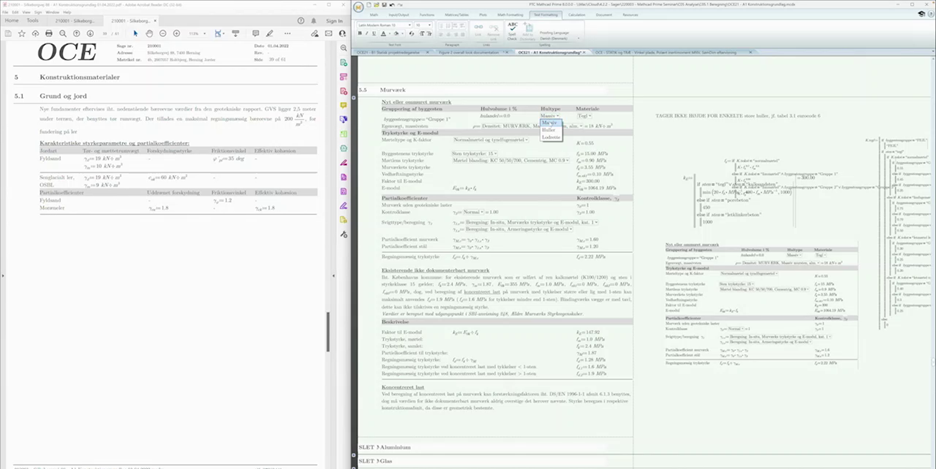 Andy and Daniel also discuss Daniel’s favorite Mathcad features (including combo boxes, vectors and matrices, and programming), why he uses Mathcad over other software, and features he’d like to see included in future releases of Mathcad Prime.

This session earned the highest average poll rating of the four sessions during the conference. We’re thrilled to showcase PTC Mathcad customers like Daniel, and we’re currently reaching out to more customers to share your success stories with the world.

We’re already planning out Mathcad’s events for the next 12 months, including the fourth-annual Mathcad Virtual Conference. During this year’s conference, we had a free-text field survey where we asked what kind of content you’d like to see in future webinars, videos on our YouTube channel, and blog articles. We tried a lot of new things at Mathcad Virtual Conference 2022 that other product teams at PTC haven’t done before. If you have feedback on any part of the conference, or if you’d like to suggest changes or topics for what we do in 2023, please comment directly to me on the PTC Community.

The on-demand Mathcad Virtual Conference 2022 sessions and worksheets are completely free for you.

David J. Newman is a Marketing Specialist for PTC’s CAD segment. He works with PTC’s partners so they have the marketing assets they need, and he also is in charge of the strategy and execution for PTC Mathcad marketing.