Halloween is a wonderful holiday, one of my favorites. To quote Eric Matthews from Boy Meets World (my favorite TV show ever), “Halloween…is the one holiday that’s supposed to bring loved ones together.” Okay, maybe not: Obviously St. Patrick’s Day is the ultimate family holiday. Nevertheless, Halloween is full of magic, horror, imagination, and, perhaps best of all, candy.

I don’t know if this is just an American thing, but it seems like we take any opportunity to consume copious amounts of candy or food. And perhaps no other holiday places sweet treats at the forefront of its tradition like Halloween.

So instead of dropping pumpkins from the top of a parking garage, I thought I would take a sweeter approach for this year’s Halloween blog. I started wondering, how much candy do Americans actually consume during Halloween?

First, I need to get an estimate of the actual quantity of candy that $2.5 billion can purchase, so I’ll determine a representative candy purchase. Walmart has a 250-piece, 6-pound bag of MARS Chocolate for $19.54. It has variety and quantity, so I will assume that it is what all $2.5 billion are spent on. This means that almost 128 million of these bags will be purchased this year.

But each bag contains some assortment of Twix, 3 Musketeers, MilkyWay, M&M’s, and Snickers. Each type of candy has a different serving size and calorie count, and I can’t assume that the 250 pieces will be evenly divided among the different types. Looks like I will have to do some field research. Off to Walmart I go to buy 250 pieces of candy. Strictly for research purposes. Science demands sacrifice.

The breakdown is as follows: 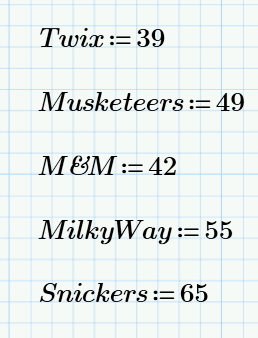 While these amounts will vary between bags, I am using my bag as representative.

To be honest, I was surprised that there were exactly 250 pieces. Impressive. My colleague, Tim, had told me that these variety packs always seem to have the fewest number of the best item. As you can see above, he was absolutely correct. Twix are objectively the best candy bar out there, and they represent the smallest portion of my monster bag. A travesty, if you ask me. *Begins stress-eating Twix from the 6-pound bag of candy in his desk drawer*

Looking at the nutrition facts, I get the serving size and calorie content for each candy.

Representing calories per serving of each candy type in math software.

Note that food calories are actually kilocalories, so I use that unit here.

Now I estimate how many pieces of each candy are purchased with the $2.5 billion by multiplying the 128 million bags by the pieces of candy in each bag. 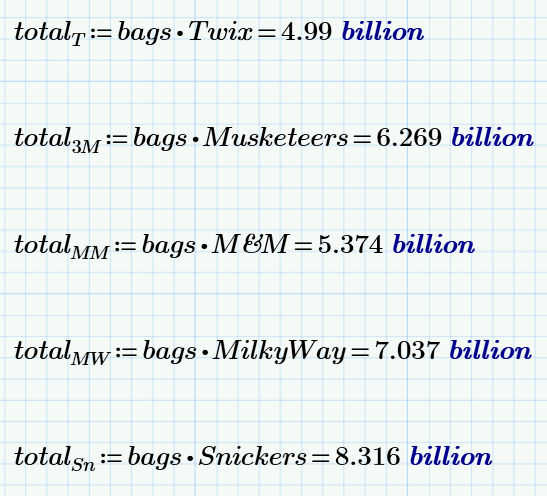 Dividing this by the serving size gives me the number of servings for each type of candy. 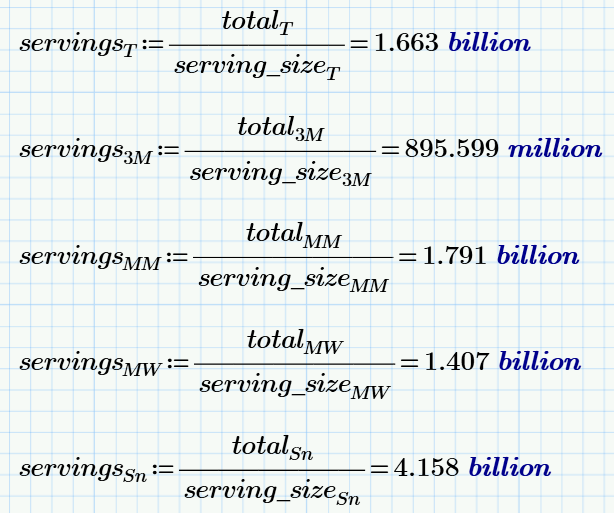 And now, multiplying the number of servings by the number of kilocalories per serving, we get the total number of calories consumed for each type of candy. Finally we sum those individual totals into the grand total. 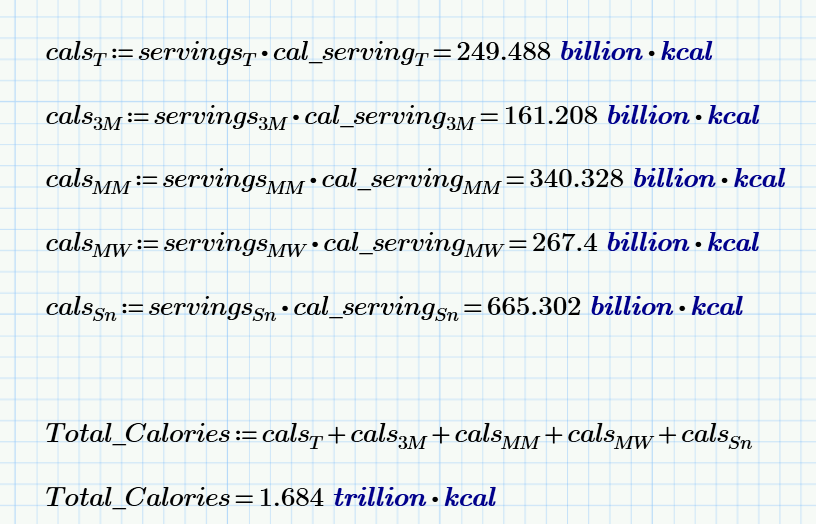 Software shows our total calories consumed if we eat all our 2016 Halloween candy.

Approximately 1.68 trillion food calories will be consumed this year for Halloween. Okay, so that’s going to ruin my diet. But by how much?

Well, at the peak of his training, Michael Phelps was consuming about 12,000 food calories per day. The total number of calories that will be consumed during Halloween this year would provide Michael with his daily calorie provision for more than 384 thousand years. No big deal.

The calories in the candy could provide over 1 billion people with 1500 food calories for a day.

Calculating how many average people total 2016 Halloween candy will sustain.

That still doesn’t really help understand how much energy is in all that candy. In July 2016, the entire state of Massachusetts generated 3.696 million megawatt hours of electricity. All that Halloween candy is equivalent to almost 2 million megawatt hours, meaning that the energy in that candy could power the entire state of Massachusetts for more than half the month of July.


But let’s get a bit more dramatic. All that candy is equivalent to more than 7000 terajoules. (It should be noted that I am using a lot of custom units here: MWh, TJ, million, billion, trillion).

The first atomic bomb detonated by the U.S.A. in the Trinity Test on July 16, 1945 in New Mexico had a yield of 80 TJ. In other words, the total calories that we can estimate being consumed during Halloween this year is equivalent to almost 100 atomic bombs.

That brings us to the age old question:

Mathcad is engineering math software that helps you perform, analyze, and share all your most vital calculations. Engineers at ground-breaking companies use it, and now you can try your own free-for life-version and see what this powerful math software can do for you. Download PTC Mathcad Express today.