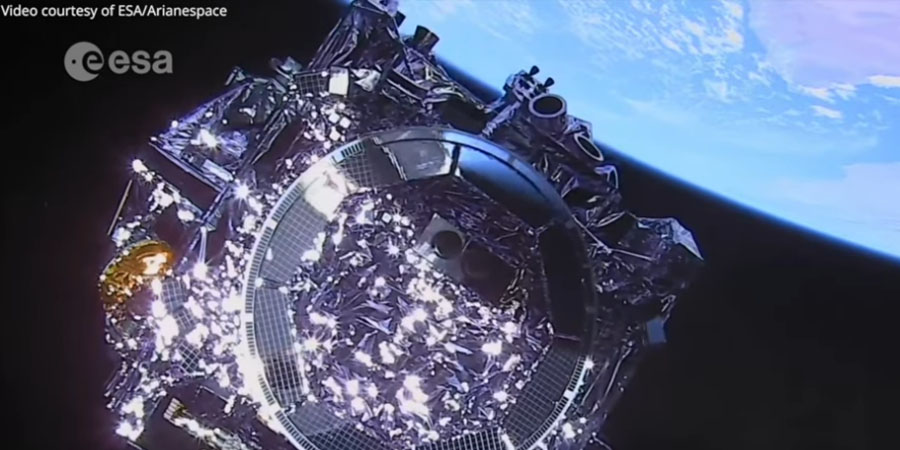 Mathcad Prime use in Analysis of JWST

When I discuss Mathcad Prime with other engineers, I sometimes hear comments to the effect that it can only be used for basic problems. My personal experience, however, is different as I have been able to use Mathcad to solve rather complex ones. As part of the verification of software results process I described on the March 8th article titled “Mathcad as an Essential Tool Within Your FEA / CAE Process”, Mathcad Prime was used on the analysis of some of the deployments and dynamic events of the James Webb Space Telescope (JWST). A most interesting example is the dynamic analysis of the separation of the telescope from the Ariane 5 Upper Stage.

The JWST observatory was launched on a European Space Agency (ESA) Ariane 5 launch vehicle (LV) from the Guiana Space center in Kourou, French Guiana, on Christmas Day 2021. The LV inserted JWST into a direct transfer orbit away from the Sun and towards the Earth-Sun Lagrangian Point L2 approximately 30 minutes after liftoff. Three propulsion mid-course correction (MCC) maneuvers were required for JWST to reach L2. This was because, by design, the LV injection process provides less energy than required, and to account for deviations from the ideal trajectory after the injection and separation processes. 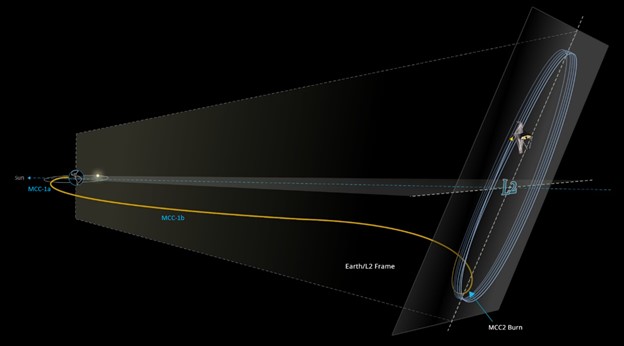 The separation process is one of the most critical moments of the mission. If not done correctly there is a risk of collision between the upper stage and spacecraft; the post-separation spacecraft tip off rates have to be minimized; the relative velocity between the upper stage and the spacecraft has to meet a minimum requirement; and the resulting trajectory vector can’t deviate excessively from the optimal one, or else during the MCC-1a maneuver more propellant than desired would be needed. Because MCC-1a provided the majority of the energy needed to achieve the L2 orbit while MCC-1b and MCC-2 maneuvers provided small corrections to establish the final orbit, even a small error during the LV injection into the direct transfer orbit to L2 or on the separation had large propellant consequences.

In our March 8th article I described in detail how useful it can be to use Mathcad Prime to create mathematical models that can be used to verify the results provided by complex CAE software packages. Following this approach, Mathcad Prime was used to create a dynamic analysis model of the separation event. Six differential equations of motion were derived and then solved simultaneously using Prime’s ODE solver to determine JWST’s post separation linear and angular displacements, velocities, and accelerations, as well as the corresponding linear and angular momenta, for a myriad of scenarios. The effect on the separation dynamics of the propellants’ sloshing inside their tanks was also analyzed via additional differential equations. The results matched those of the dynamic analysis software with a discrepancy of less than 3%.

The LV injection of JWST into its direct transfer orbit and the separation were so accurate that during the mid-course corrections we ended up using a lot less propellant than expected. Hence, the length of the mission will be extended by additional years, and the Webb telescope will have enough propellant to allow support of science operations in L2 orbit for significantly more than a 10-year science lifetime (~20 years is the latest estimate).

Actual video footage of the separation sequence can be seen on this video courtesy of ESA and Arianespace:

Whenever you face a challenging engineering problem, consider using Mathcad to create a mathematical model of it that can be used to validate the CAE software results. I personally find this approach very effective and rewarding, and highly recommend it.

* The views, methods and opinions expressed in this article are those of the author and do not necessarily reflect the official policy, procedures or position of NASA Goddard Space Flight Center or the National Aeronautics and Space Administration. NASA does not promote or endorse any products and this article does not represent an endorsement of Mathcad Prime.

Graphics and images courtesy of NASA and ESA

The author is not affiliated to PTC in any form and received no financial compensation for this article.

Features monthly tips, events, news, and inspiration to your inbox.

Product Lifecycle Report guest authors are industry thought leaders on topics and insights related to the IoT. If you are interested in becoming a guest author, please contact Michelle Hopkins at mihopkins@ptc.com.