Calculate and Plot Shear and Bending Moments in Mathcad 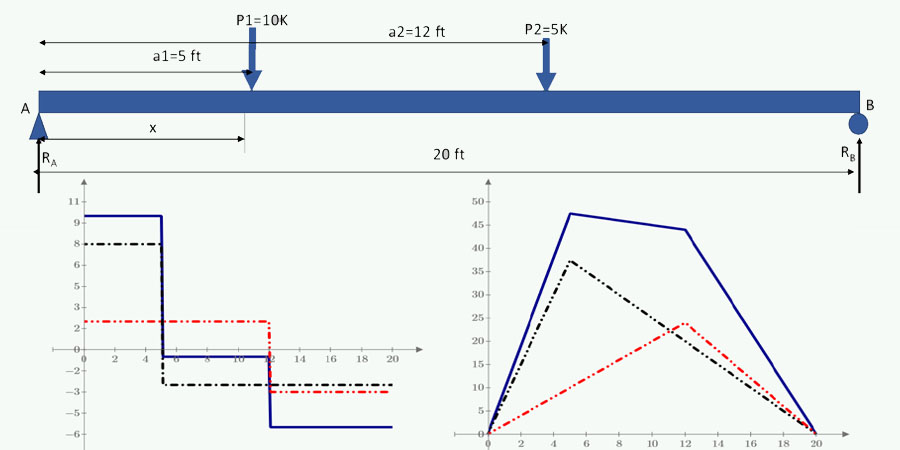 A truck driving on a bridge causes the supporting beams to deflect, resulting in various stresses in the beams. Similarly, as you walk across the floors in your home, the beams or joists deflect under your weight. The deflection is a result of the loading, which is related to the shear, the bending moment, the beam slope, and the beam deflection. In this blog and several that follow, I will discuss how Mathcad can be used to calculate, plot, and derive these relationships.

In this blog, I will show how to do this for simply supported beams with varying loading conditions.

I am a proponent of creating functions so that they can be used multiple times, rather than just solving a single problem. So, first, let's create some functions to help solve for and plot the shear and bending moment diagrams for a uniformly loaded, simply supported beam.

The figures in this blog were created in Microsoft PowerPoint as embedded objects. If you download the linked Mathcad file and double click on the figure it will open in PowerPoint.

The right arrow in the below functions is the Symbolic Evaluation Operator from the Symbolics section on the Math tab. It provides a symbolic solution rather than a numeric solution. 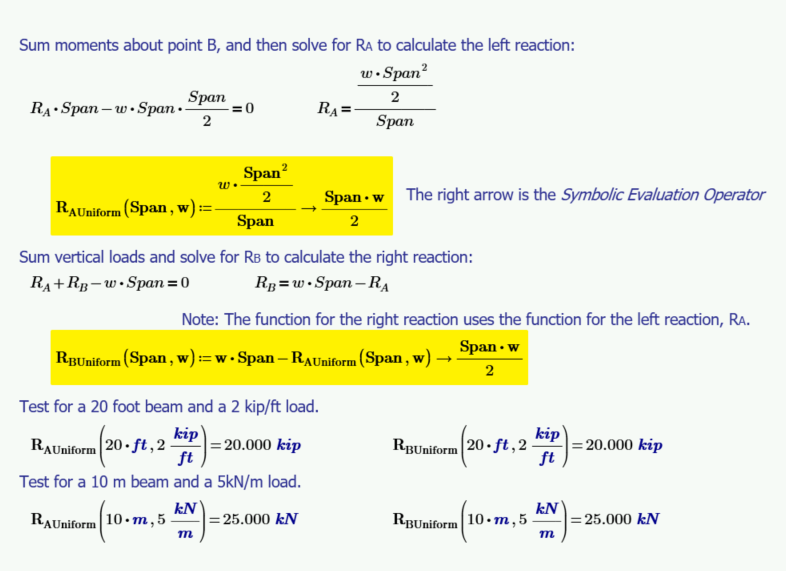 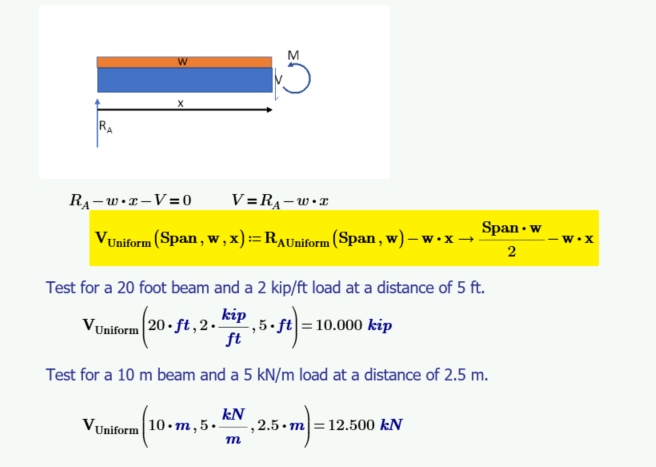 Now, write a function for the moment at a distance x by summing the moments about x. 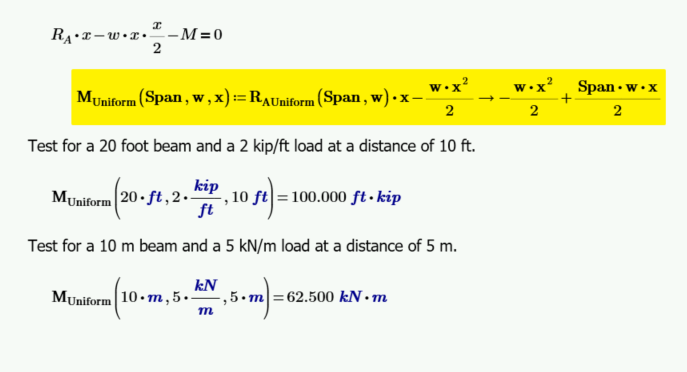 Now that the equations are written, calculate and plot the shear and moment diagrams using the XY plot features. Insert the plot from the Plots menu in the Traces section. Select XY Plot from the Insert Plot button.

In order to create the plots, define the values for span and load, and then create a range variable for the points to plot. The range variable is defined by a starting value with the second value setting the step size. The final number is the ending value. It is created just like it looks. Type the first value, then type a comma and enter the second value, which sets the step size. Then, type . . and enter the ending value.

The equation for shear or moment will be on the y-axis. 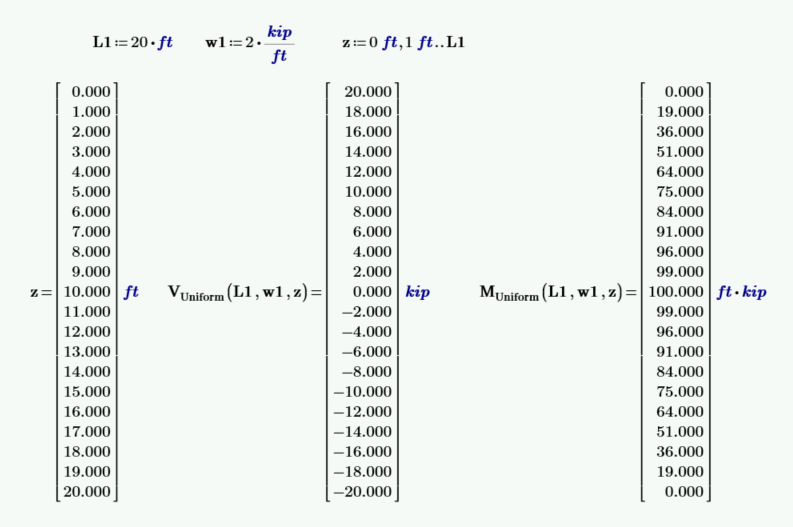 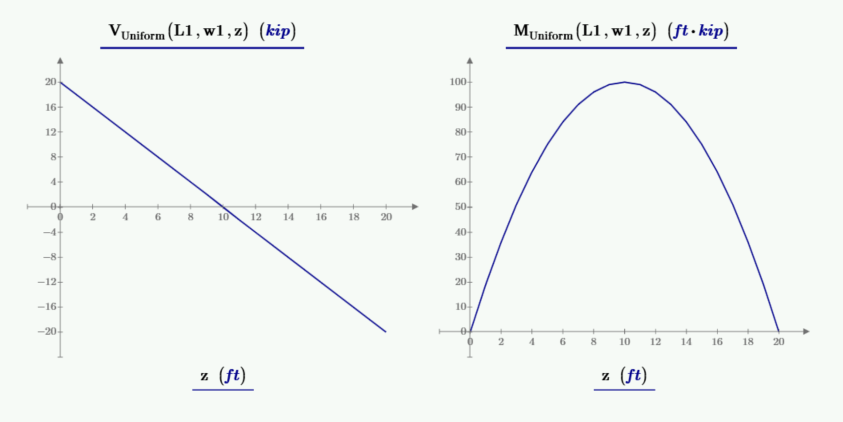 Test again using metric units. Define values of span and uniform load, and the range variable, z, which will set the points to plot. 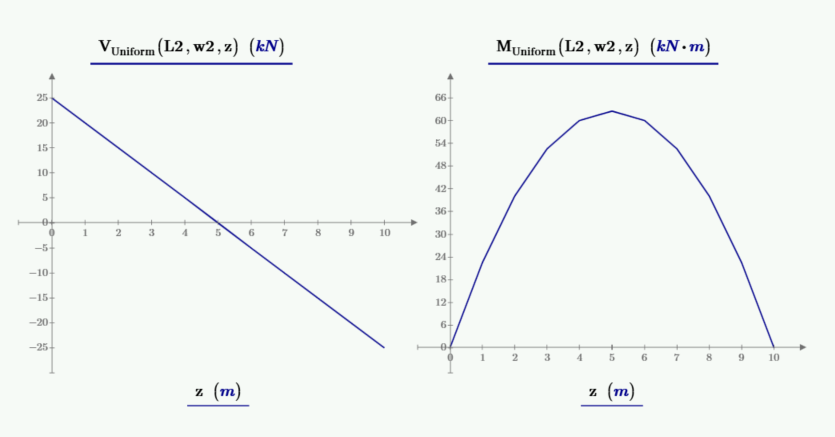 Let's now create shear and moment diagrams for a point load, P, placed anywhere along the beam at a distance "a" from the left end. Create functions to describe the loading, shear, and moment. Ignore the beam weight for this exercise. For this example, I use the keyword solve with the Symbolic Evaluation Operator to demonstrate how to solve for RA. 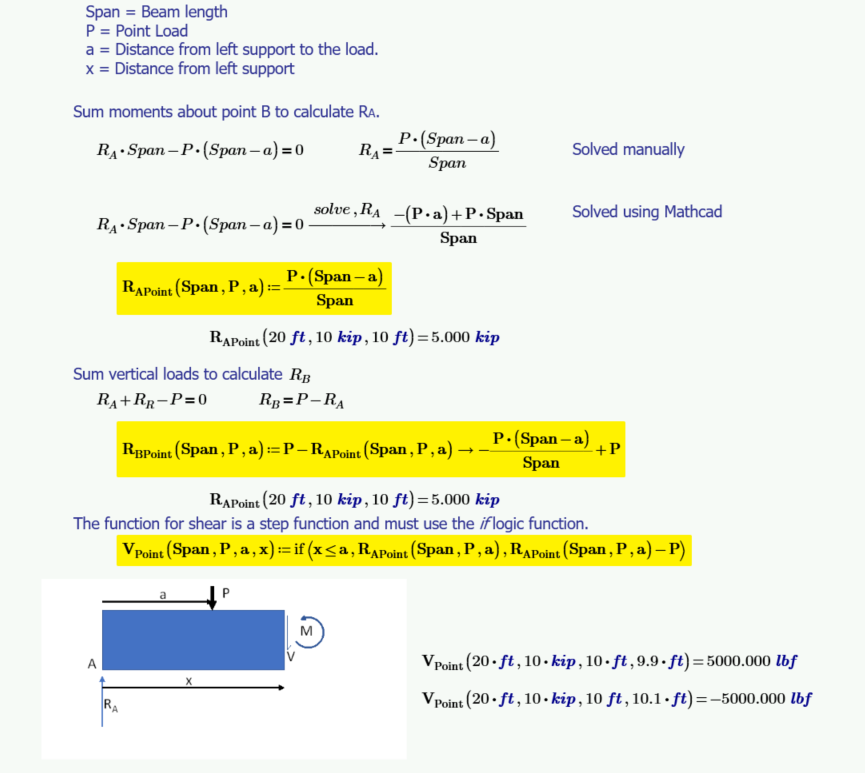 Now that the equations for a point load are written, calculate and plot the shear and moment diagrams using the XY plot features.

In order to create the plots, define the values for span, load, and distance, and then create a range variable for the points to plot. 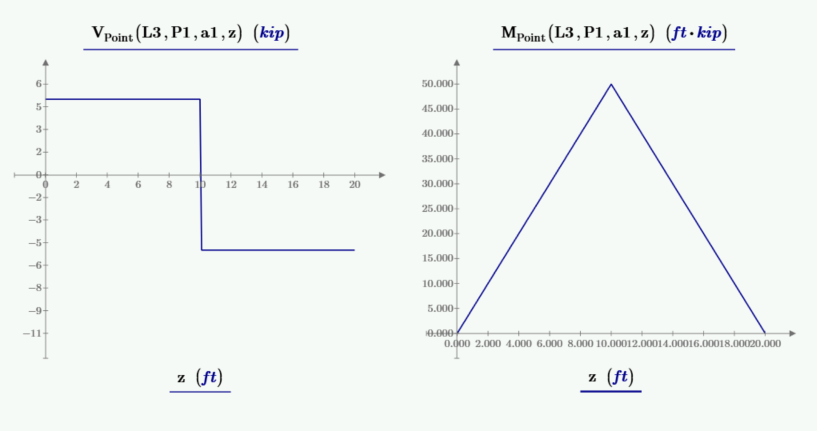 This final example derives the functions for a triangular loading.

This example uses the solve keyword with the Symbolic Evaluation Operator to derive the functions for reactions. 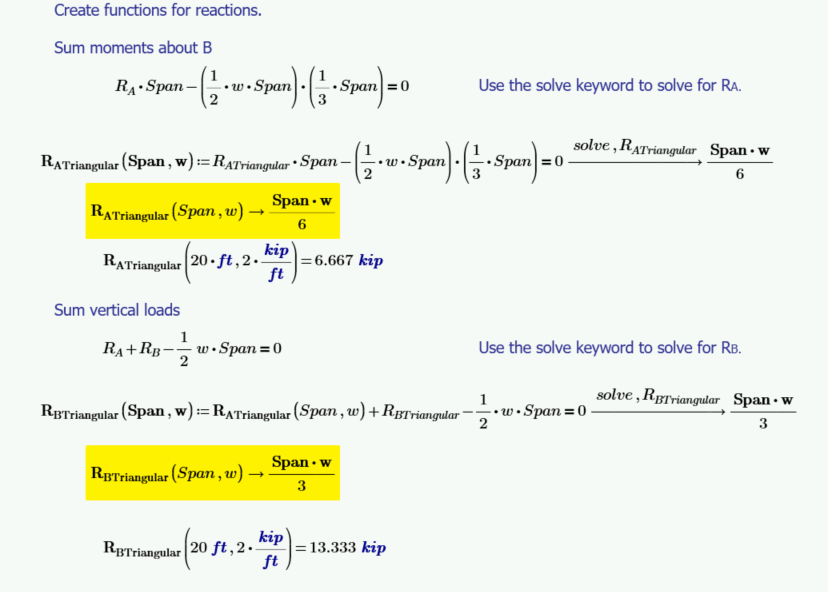 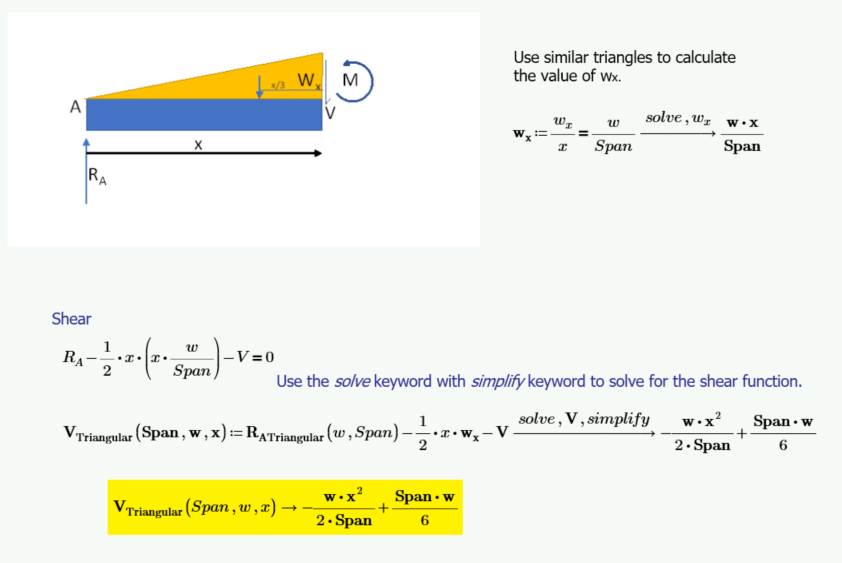 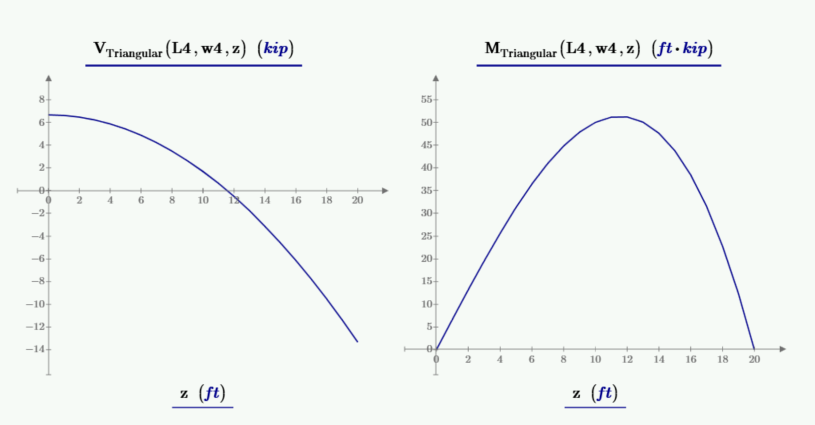 Now that functions for uniform load, point load, and triangular load have been derived, use these functions to combine multiple loading conditions.

Note the use of the Vectorization operator in these examples. It is found on the Matrices/Tables tab in the Matrices and Tables section, in the Vector/Matrix Operators button. The Vectorization operator is the bottom operator. (It is also found in the Operators section of the Math tab in the Vectors and Matrix area. The keyboard short cut is CTRL + SHIFT + ^.) It is a right pointing arrow above the expression. It tells Mathcad to perform the operation on an element-by-element basis. 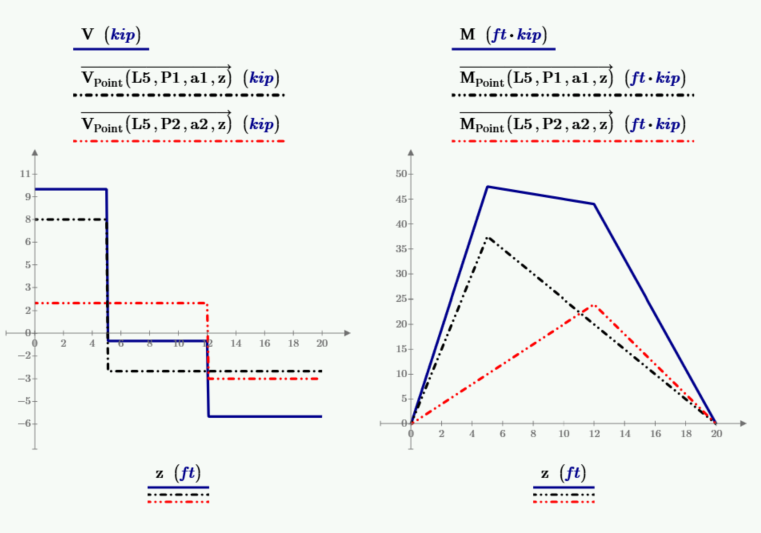 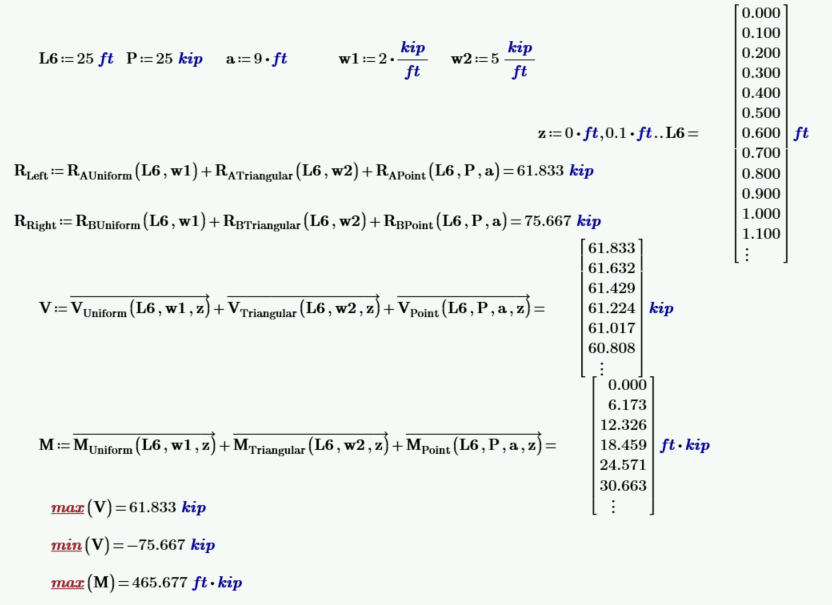 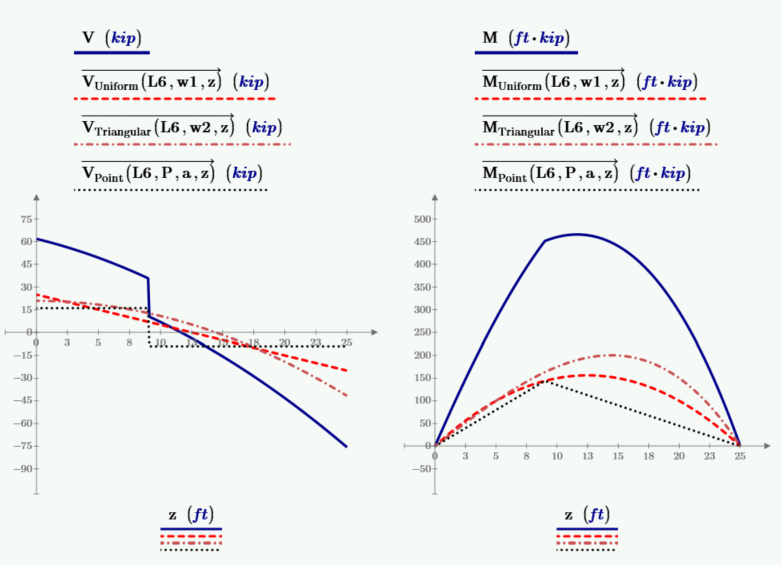 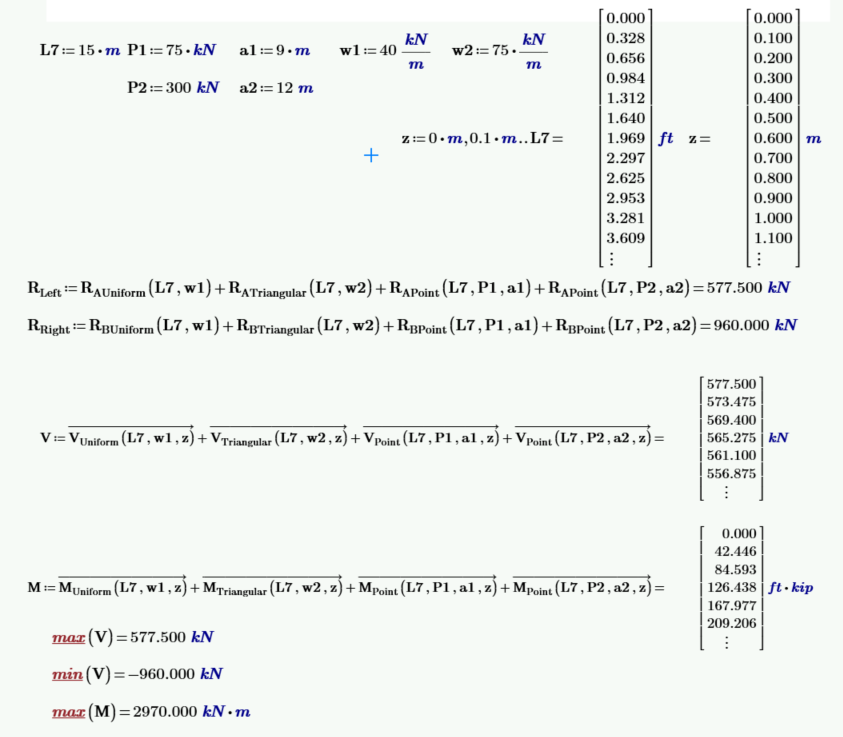 In this blog, I have used shear and bending moment diagrams to illustrate many Mathcad features. In addition, I have shown how to combine functions for uniform load, triangular load, and point loads to calculate and plot reactions, shears, and bending moments. These examples illustrate:

My next blog expands on these topics, showing how to derive functions for maximum beam bending moment for various loading conditions.

Download a free 30-day trial of Mathcad Prime to see the best of Mathcad for yourself.

Get It Now
Tags:

Brent Maxfield is from Salt Lake City, Utah. This is an ideal location for him because of his love for outdoor activities. He loves hiking and skiing in the nearby mountains, and also loves to explore the red rock canyons and deserts found in Southern Utah.

He has used PTC Mathcad extensively for 20 years. He is the author of “Essential PTC® Mathcad Prime® 3.0: A Guide for New and Current Users”, available on Amazon.com.